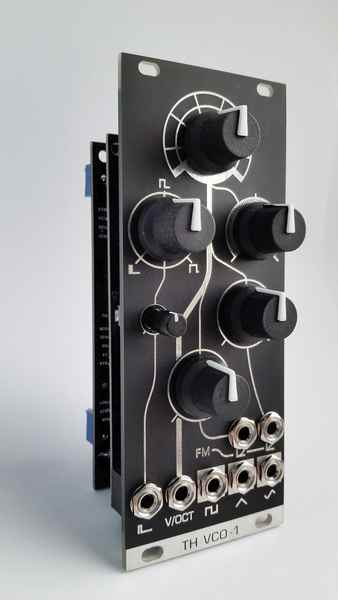 The VCO1 has a 1V/Oct input which enables a tonal control ("play notes") of the oscillator. With a exponential and linear FM input additional modulation and mangling of the original VCO-Waveforms can be achieved.

The TH VCO-1 is a relatively simple VCO designed by Thomas Henry. Thomas Henrys' original circuit for ±15V has been modified by Thom Whitwell to be used with Eurorack's ±12V (see powersupply). View the schematic of the component board (without pots and jacks) here: https://github.com/atoav/TH-VCO1/raw/master/vco1_components.pdf . It has a triangle core and works as a Schmitt Trigger Integrator. A Schmitt Trigger is a small circuit which turns an arbitrary input signal into a rectangle wave: if the input signal exceeds a certain treshhold, the Schmitt Trigger will output a fixed positive voltage. If the input signal is below a certain treshhold, the Schmitt Triggers' output will flip to a fixed negative voltage. The output of the Schmitt Trigger is fed into a opamp based Integrator. A Integrator calculates "the surface under a graph" which means while its input faces a positive voltage it produces a rising voltage and once it's input goes negative, it produces a falling voltage (resulting in a triangular wave). The output of this integrator is fed into the Schmitt Trigger again, resulting in a steady triangular oscillation.

The frequency of this oscillation is controlled by an LM13700 OTA which works a bit like a VCA, but is actually controlled by current. One of the harder parts of designing an accurate VCO circuit is getting a good linear (evenly "tuned") exponential voltage control which in our case is achieved by the use of an monolithic matched pair of NPN and PNP transistors in one chip (THAT340) and by using Tempco resistors which have a temperature characteristic opposite to other parts of the circuit in order to "cancel out" temperature drift. By using these Tempcos we can avoid big changes in tuning when eg. the room temperature changes.
For a more thorough insight on this refer to temperature compensation theory and dial-a-tempco.